Spent the last few days on the Karpasia peninsula on the BirdLife Cyprus weekend there. A mixture of late autumn migrants and early winter visitors – total of 88 species seen over the two and a half days in the area. Interesting to see early Mistle Thrush, European Robin and best of all Finsch’s Wheatear. The number of Stonechat increased over the weekend and there were still plenty of Whinchat, Spotted Flycatcher, Red-backed Shrike and Common Redstart around. A small number of European Bee-eater and Masked Shrike were seen together with a lone Turtle Dove and about five Red-footed Falcon.

Other raptors seen were an Eleonora’s and Peregrine Falcon, an adult and juvenile Bonelli’s Eagle, a Marsh and Montagu’s Harrier and at least four Eurasian Sparrowhawk. Little Owl and Scop’s Owl were around Rizokarpasos village. Two Northern Raven passed in front of the cars at Agios Therissos.

At least three groups of migrating Common Crane were seen today. Two flew over the group to the east of Agios Philonas and then headed south. Around thirty were seen heading SW near the Galinoporni just before 13.00pm and then when heading home I saw around 200 to the north of Galateia gaining height. 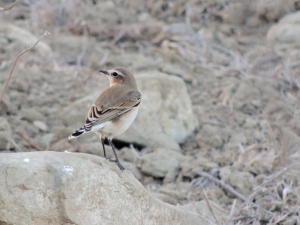