Finally I was able to get out birding today even if mainly to do the waterbird count around Larnaca. What a difference from last December though. Then there were around 7000 Greater Flamingo on the Larnaca Salt Lake but the low rainfall of the last few months meant there is very little water in the Lake yet and I found a only three young birds at the Sewage Works – although at Akrotiri Salt Lake there are currently around 11000 as that has had water in all year. There were around 1300 Northern Shoveler and 730 Common Teal as well as nearly 200 Mallard and plenty of Common Coot and Little Grebe on the Sewage Works Pools. There are thirteen Greater White Fronted Geese and twelve Black-necked Grebe. The only other duck species I found was a single Northern Pintail. Plenty of Black-headed Gull but only one juvenile Caspian Gull.

There were a lot of Eurasian Skylark, Meadow Pipit and some Red-throated Pipit around and at least 160 Golden Plover on Spiros Pool. On the main Salt Lake there were just under 400 Common Shelduck and some Kentish Plover, Little Stint and Dunlin as well as Black-headed Gull and three Armenian Gull. A flock of fifty Northern Lapwing flew over and a Marsh Harrier and Common Buzzard were hunting in the area. In the reeds I found four Reed Bunting as well as Chiffchaff, Linnet, Corn Bunting, Chaffinch, Song Thrush Cetti’s Warbler, Robin and Stonechat.

I continued to Petounta Point where I spent a long time watching both a Jack Snipe and a Water Rail that were out in the open. Also there were five Common Snipe, a Temminck’s Stint, a Common Sandpiper, some Common Teal, nine Common Starling, plenty of Meadow Pipit and White Wagtail, and a Marsh Harrier which was perched in the reeds as I arrived. 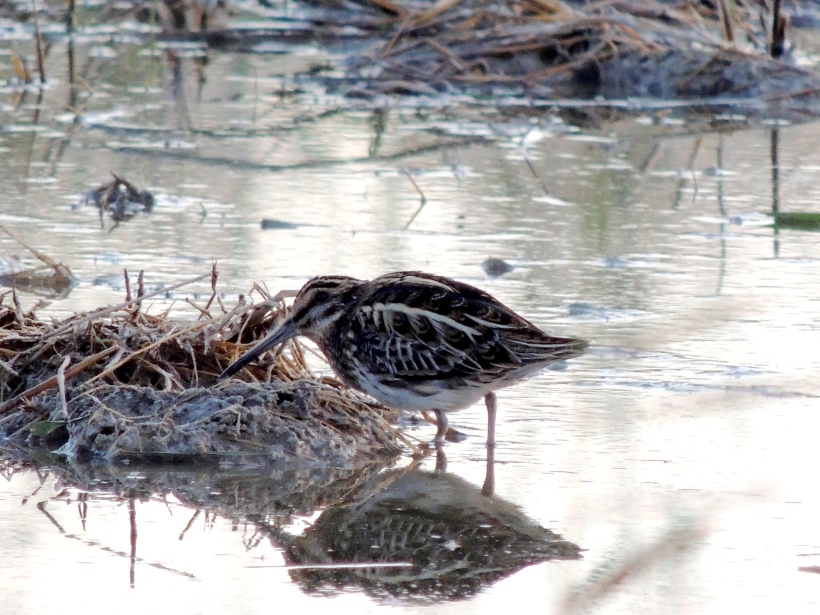