It was still windy in Paphos this morning although less so than the previous two days. John and Joy wanted a morning out to see some East Mediterranean birds;  so we visited Paphos Sewage Works first to find Spur-winged Lapwing. We only located two of them but we spent most of our time watching several Black-headed Wagtail in the lower end of the Ezousas river. Three Baltic Gull passed off shore heading west and five Little Ringed Plover flew in off the sea and heading inland. There were still some European Serin around and a noticeable passage of Common Swift, Barn Swallow and Common House Martin.

We found a single Red-rumped Swallow as we drove down to the sea at Mandria and then watched two Hooded Crow mobbing a Eurasian Sparrowhawk. More Black-headed Wagtail were around the area as were several flocks of Spanish Sparrow. Near the coast we found at least two Little Ringed Plover feeding on the grassy area where there were also several Isabelline and Northern Wheatear and a male Eastern Black-eared Wheatear. A flock of around twenty five Greater Short-toed Lark were also feeding there.

Behind the Asprokremmos Dam we had to be very patient trying to find a Cyprus Warbler but finally a male appeared and sang for us. Nearby we had found a melanistic male Sardinian Warbler with an all-black head. We had a good selection of birds near the Mast including a migrating second calendar year male Western Marsh Harrier, Red-throated Pipit, Little Owl, Corn Bunting, Eastern Black-eared Wheatear (dark throat), Chukar, Tawny Pipit and Cretszschmar’s Bunting. 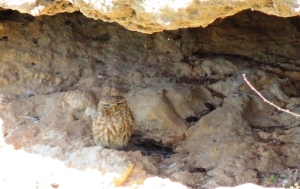