The weather was completely different today from recent visits to Akrotiri. The sea was calm with only the slightest breeze. Gloria, Stephen and I started at Kensington Cliffs where we watched several Eleonora’s Falcon flying out at sea and roosting on the Cliffs. Two Griffon Vulture briefly rose above the cliffs before flying round the promontory to Tunnel Beach. Several male Sardinian Warbler were singing; we heard some Chukar and watched two European Shag and Yellow-legged Gull down on the sea. We moved on to Phassouri where we found a couple of European Serin in the eucalyptus plantation and tried to locate a singing Eastern Olivaceous Warbler – a feat that was to be repeated several times during the day until we finally saw one – albeit briefly at our last location.

Squacco Heron, Cattle and Little Egret, Purple Heron and Glossy Ibis were all at the Reed Beds where we also found Common Snipe, a single Ruff and several Wood Sandpiper. We stopped to watch a Woodchat Shrike, both a female and a male Red-backed Shrike. Both Eurasian Reed Warbler, Eastern Olivaceous Warbler and Cetti’s Warbler were calling/singing in the reeds. The water on the area near the old rabbit farm has nearly all gone but we found a couple of Wood Sandpiper, a single Dunlin, three Little Stint, three Kentish Plover, a Common Redshank and a Spur-winged Lapwing. I had received info that a Rose-coloured Starling had been seen in Akrotiri Village early in the morning so we decided to head there and see if we could relocate it. We had no luck with that but were very pleased to see two male Golden Oriole in the trees there.

Heading back to the Akrotiri Gravel Pits we found more shrikes – four Woodchat and a male Red-backed, a male and a female Common Redstart, a couple of Winchat, a rather pale Northern Wheatear and a Common Cuckoo. We ate our lunch near the Reed Beds but the only birds on view were a large number of Common Swift. Driving to Lady’s Mile along the south edge of the Salt Lake we saw several Greater Flamingos in the distance – a pink blob in the heat haze. Our persistence in checking out all the doves we saw also paid off when we finally found a Eurasian Turtle Dove. The sun was against us at Lady’s Mile but there was an interesting selection of waders including Black-winged Stilt, Ruff, Common Greenshank, Curlew Sandpiper, Wood Sandpiper and Little Stint. We also found a Black-tailed Godwit and then a breeding plumaged Bar-tailed Godwit (unusual for Cyprus).

At Zakaki Marsh we found a Common Sandpiper and, especially interesting, two Temminck’s Stint. A couple of Glossy Ibis, two female Yellow Wagtail, several Wood Sandpiper, two Spur-winged Lapwing, some Mallard and two Northern Shoveler could be seen from the hide. Finally a single Ferruginous Duck came into view allowing better views that the three in flight that we had seen at Phassouri earlier.

To finish the day we headed inland to Prastio Kellakiou where we saw some completely different birds. Five Red-rumped Swallow were the first to greet us as we got out of the car. We could hear two singing Black-headed Bunting – one each side of the track and we spent some time watching them. Two Cretzschmar’s Bunting flew down to drink from a small puddle as did a male Serin, a male Spanish Sparrow and several Goldfinch. We could hear Eurasian Turtle Dove purring. There were at least two pairs of Masked Shrike and finally we located a couple of singing male Cyprus Warbler. Stephen had a fly-by Eurasian Hoopoe but we couldn’t find it again, although we finally had a brief look at an Eastern Olivaceous Warbler as we left the area.

Stephen and Gloria had asked to see a wide variety of birds and we certainly had that on an enjoyable day out. 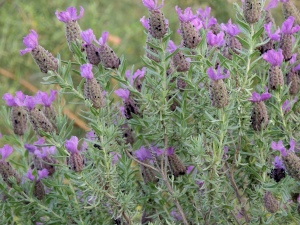