For our second day out this spring, I met John and Madeline at Avdimou and we headed for Kensington Cliffs. We stopped to watch a singing male Sardinian Warbler and then scanned the bay. We quickly found several Eleonora’s Falcon on the cliffs and then watched as others flew close to us and around the bay. On some rocks in the bay five Squacco Heron were resting. Both that species and strangely Common House Martin were present at most of the coastal sites we visited during the day. Spotted Flycatcher were also present in good numbers around the Akrotiri Peninsula and we found our first of the day at Phassouri Reed Beds where we also had at least five Squacco Heron, a Cattle Egret, several Little Egret, six Glossy Ibis , a juvenile Black-crowned Night Heron, up to sixteen Wood Sandpiper and a single Ruff. Five Eurasian Turtle Dove flew over as did a Western Marsh Harrier. In the reeds were several Eurasian Reed Warbler and also a Woodchat Shrike, while two female Black-headed Wagtail were feeding in the footsteps of one of the grazing cattle.

The Gravel Pits were quieter but we did find a Purple Heron, Kentish Plover, Whinchat and Spotted Flycatcher. In the gardens of Agios Georgios Church we found another Woodchat Shrike and at least five Spotted Flycatcher. Madeline located a yellowish warbler in one of the pines which then started singing. The ID was then obvious – an Icterine Warbler – the star bird of the day and a lifer for John and Madeline.  We could see around a hundred Greater Flamingo on the main Salt Lake and spotted a Great Egret feeding at the edge with several Little Egret. A female Montagu’s Harrier flew over the area. We had our lunch in the shade of the trees near Bishop’s Pool watching European Bee-eater and yet another Spotted Flycatcher. As we drove on a male Golden Oriole flew in front of us.

There had been a clear out of waders on Lady’s Mile since I was last there although on the eastern end we found nearly twenty Common Ringed Plover, several Ruff, many Little Stint and some Wood Sandpiper. Another good find was a Little Gull and six Squacco Heron were migrating along the coast. At the Zakaki Marsh hide we watched more Wood Sandpiper and female Black-headed Wagtail. We also found another Squacco Heron together with six Little Egret and a Grey Heron. We then visited the east side of the Salt Lake to get better views of some of the waders we had seen there when watching the Greater Flamingo. The light and heat haze were against us but we did see four Little Tern, several Black-winged Stilt and more Ruff, Common Ringed Plover and Little Stint. In the distance we could see a hazy flock of terns feeding – it was impossible to ID them with any certainty but it is likely they included White-winged and Whiskered.

We then headed inland to our final location at Kellakiou. On the way a Collared Flycatcher was seen from the side of the road. At Kellakiou we found a couple of Cyprus Wheatear and a single Cyprus Warbler. Eastern Olivaceous Warbler were singing and European Bee-eater migrating over the area. Eurasian Turtle Dove, European Serin, Common Chaffinch, Spanish Sparrow and juvenile European Goldfinch were coming down to drink at a small pool of water. Four Red-rumped Swallow were also flying down to drink there. At least three male Black-headed Bunting were singing and we were able to get close views of two of them as well as of at least seven Cretzschmar’s Bunting. A lone Masked Shrike was seen flying across the valley. This great experience, both listening and watching both migrant and resident breeders setting up territories ended our day out. 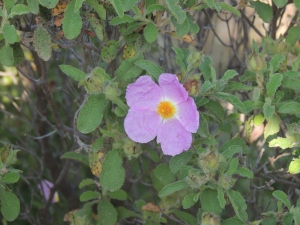