Our first stop was at Kensington Cliffs as Stuart and Frances were keen to see as many raptors as possible. We found at least five Eleonora’s Falcon sitting on cliffside ledges as we first scanned the area but then two dark morph birds flew in front of us shortly followed by several light morph individuals. We were treated to their aerial display during our time there with several Alpine Swift also flying around. Checking the rocks at the bottom of the western cliff face we found six Eurasian Shags. A single Baltic Gull was a surprise find in the bay and then we were pleased to see two Griffon Vulture fly up from behind the cliffs, circle over Episkopi Garrison and then head inland.

Pleased with our start we moved to Akrotiri where we visited Phassouri Reed Beds, Akrotiri Gravel Pits, Lady’s Mile and Zakaki Marsh. Far fewer migrants were around than when I had visited the area at the weekend –especially waders – but we still managed to get good views of European Bee-eater, Temminck’s Stint, Glossy Ibis, Squacco Heron, Eastern Olivaceous Warbler, Spotted Flycatcher, Woodchat Shrike, Ferruginous Duck, Armenian Gull, Spur-winged Lapwing and Kentish Plover.

We then headed inland and ate our lunch in a valley behind Omodos. There we watched at least four singing Black-headed Bunting, two singing Cretzschmar’s Bunting, at least one Long-legged Buzzard, several Cyprus Wheatear, a Corn Bunting, two Red-rumped Swallow and several European Serin. On the way back to Larnaca we visited the Panagia Stazousa valley where we added Chukar, Eurasian Turtle Dove, European Roller, Eurasian Hoopoe and (Stuart and Frances’ bird of the day), a Little Owl to our day’s list of species.

A good variety of birds even considering that migrating species at Akrotiri were much reduced now as we move to the end of May. 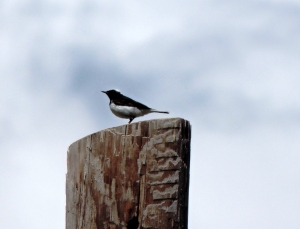