The six Common Crane were back on the Sewage Pools this morning and the long-staying Ruddy Shelduck was still there. There were many Eurasian Teal, Northern Shoveler, Mallard, Eurasian Coot, Little Grebe, Little Stint, Dunlin, Kentish Plover, Common Ringed Plover and several Black-winged Stilt. There were also single Grey Plover, Ruddy Turnstone and Northern Lapwing as well as more than sixty Greater Flamingo.

Also in the area was a late Northern Wheatear and at least six Red-throated Pipits. There were plenty of Common Stonechat setting up territories and away from the coast at Panagia Stazousa I counted at least 12. There were also several singing European Robin, a Little Owl and two late Cyprus Wheatear in that area. 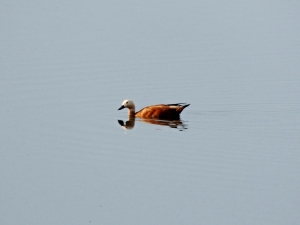