A morning out with Fulco and his son Tijmen was spent at a few locations to the north of Paphos. We visited Arodes, Androlikou, Neochorio and Kathikas and the highlights were Masked Shrike, two adult Bonelli’s Eagle, Eurasian Hobby, Long-legged Buzzard, Cyprus Wheatear and Cretzschmar’s Bunting. We also saw several Chukar, a male Black Francolin and Eurasian Turtle Dove. We spent some time sea watching near Latchi but there was no movement of migrants at the time. 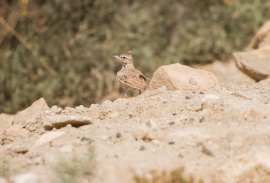