After picking Paul and Eileen up from their hotel in Pissouri we headed straight to Akrotiri for a morning’s birding. Although it was possibly even windier than the day before this time we saw several migrating European Honey Buzzard and Western Marsh Harrier as well as a continual stream of European Bee-eater. A couple of Eleonora’s Falcon were hunting over the peninsula. Also found around the reed-beds area was a female Black Francolin – one of Paul’s targets – , a Lesser Grey Shrike, six Whinchat and a couple of European Turtle Dove. Moving onto Akrotiri Gravel Pits we saw at least one more Western Marsh Harrier and at least eleven more European Honey Buzzard. Waders in the area included a Bar-tailed Godwit (a scarce bird for Cyprus), Kentish Plover and Dunlin as well as an adult Greater Flamingo.

Another wader for the morning was the Black-winged Stilt at Bishop’s Pool. There we also added two to our Honey Buzzard total and saw two more Eleonora’s Falcon. On the approach road to the pool we were especially pleased to see two migrating Lesser Kestrel – another of Paul’s targets for the morning. At Lady’s Mile we found a photogenic juvenile Greater Flamingo and searched through the waders there to find more Kentish Plover and Dunlin, as well as a Sanderling, a couple of Common Redshank, Common Ringed Plover and Dunlin. Another two Honey Buzzard flew over us battling against the wind.

Our morning out drew to a close with a return to Phasouri Reed-beds to watch a small group of European Bee-eaters calling and swooping over the area as they hunted insects to provide them with energy to continue their migration. 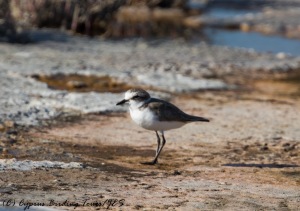