The Cyprus Bird Report 2015 is now available.
The report contains 55 colour photos, the 2015 Systematic List of 301 observed species or recognised forms which was compiled from nearly 66,000 records, the 2015 Ringing report, papers on the first Lesser Flamingo in Cyprus, putting geolocators on Cyprus Wheatears, the BirdLife Cyprus 2015 monitoring programmes, the diet of Red-footed Falcons while in Anarita Park, and autumn bird numbers in Western Paphos. The Report includes species charts and tables and a full Cyprus bird List. The front cover features a male Bearded Reedling – one of a pair at Lower Ezousas in November 2015.
The Report will be sent automatically to those BirdLife Cyprus members whose subscription includes it. Extra copies can be purchased from birdlifecyprus@birdlifecyprus.org.cy 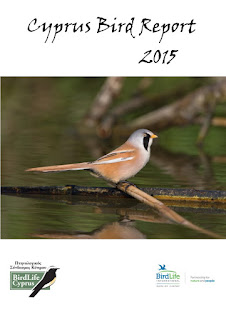