A morning’s birding with Anthony and Sarah around Akrotiri hoping to see a good variety of species. We started at Zakaki Marsh where many Grey Heron were flying down to feed behind the reeds. A juvenile Black-crowned Night Heron flew up from in front of the hide as we arrived and although we could hear many more we only got good views of one adult as it flew over the area. A Squacco Heron also flew across and a female Western Marsh Harrier quartered the reeds before swooping into the reeds where it presumably caught prey. An adult Water Rail was feeding in front of the hide and several Eurasian Reed Warbler were flitting in the reeds. Anthony and Sarah were especially pleased to see the Common Kingfisher that perched on a reed in front of the hide for several minutes.

Moving to the eastern edge of the Salt Lake we found an Isabelline Wheatear, a Lesser Grey Shrike and a female and a male Red-backed Shrike. An adult and a juvenile European Roller sat on the wires along Lady’s Mile and were very obliging. The Salt Lake itself had very little water but we spent some time watching the dozen or so Eleonora’s Falcon that were resting on the Salt flats and drinking and bathing in the water from the run off – a great spectacle.

There were several Kentish Plover feeding on Lady’s Mile itself as well as a couple of Little Stint and Dunlin which we saw as we drove to Bishop’s Pool. The first birds we saw there were a couple of Ferruginous Duck and then three Glossy Ibis feeding at the back of the pool. Two Black-winged Stilt were also there as were four Green Sandpiper and a Wood Sandpiper. A couple of Little Egret were feeding around the edge and some Northern Shoveler were resting in with the resident Mallard and Little Grebe. A couple of European Turtle Dove flew over. We could have spent longer there to be honest but we moved on the Akrotiri Gravel Pits adding Red-rumped Swallow and Sand Martin to the morning’s list as we went.

We had another Lesser Grey Shrike in the church yard as well as an Olivaceous Warbler, two Spotted Flycatcher and another two Isabelline Wheatear. It was now getting warmer and the birds were quieter although we did find a Common Greenshank and a Kentish Plover as we went through the area to our last stop at Phasouri Reed-beds. We heard and then saw a Yellow Wagtail and our last new bird of the morning was a Whinchat sitting on a fence. A good morning’s birding at the start of autumn migration although we were disappointed not to see any large raptors. 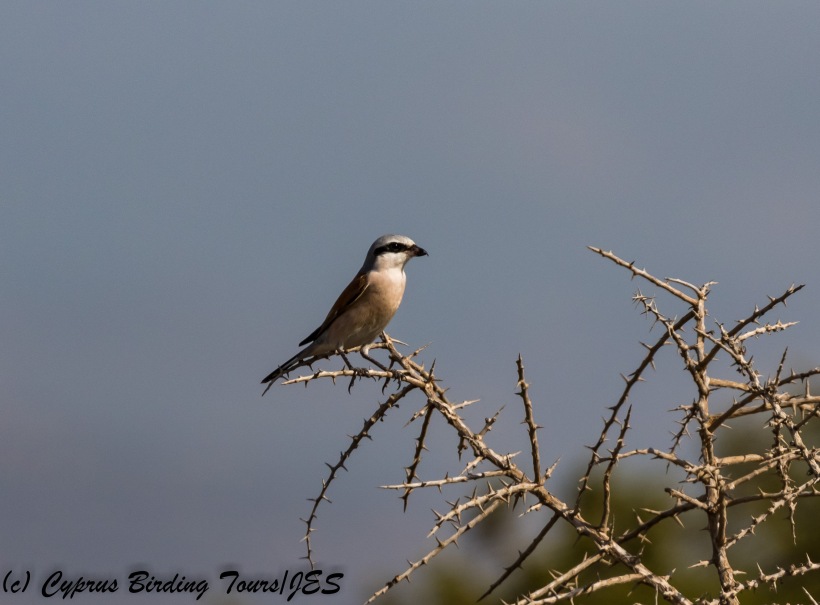