A few days in the Akamas area 6th – 8th August produced several adult and juvenile Masked Shrike, a male and a female Woodchat Shrike and among the first return migrating Lesser Grey Shrike and Red-backed Shrike. Sea watching was quiet with not much movement yet, although I had several Gull-billed and Whiskered Tern, a flock of 22 Common Sandpiper and an ‘in off’ European Roller as well as a Western Yellow Wagtail feeding in a coastal feed.
Back in Larnaca today I found a resting group of Grey Heron and Little Egret and saw a small group of Glossy Ibis flying over. Little Tern are still fishing offshore and a group of c80 Greater Flamingo are on the Salt Lake which still has some water. Another Lesser Grey Shrike was also there and while I was looking at an Olivaceous Warbler in a track side bush this juvenile Masked Shrike came to check me out. 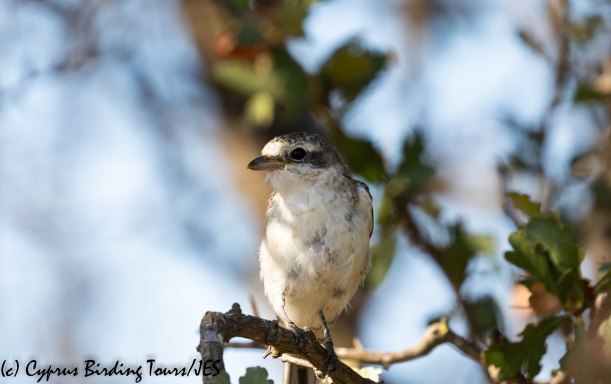 Another good day out with the Travelling Naturalist Cyprus group. Today we visited Cape Drepanum, Arodes and Smygies and we had the luck to witness first hand the amazing numbers of Painted Lady butterflies currently migrating through Cyprus. We estimate we saw at least 200,000 through the day. We also saw some good birds including more Cyprus Wheatear, migrating flocks of Grey Heron and Little Egret, Blue-headed Wagtail, Chukar, Hen Harrier, Black-eared Wheatear and a Great Spotted Cuckoo pair. We rounded the day off finding several new orchid species. 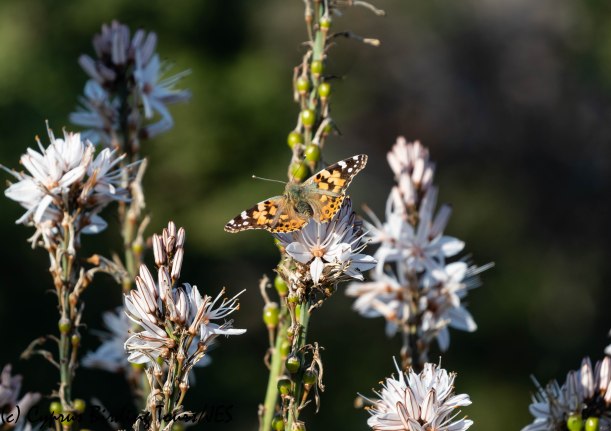 Picking David, Jan and Rachael from Polis our first stop of the day was behind the village of Neo Horio after which we moved on to the deserted village of Androlikou and then to the valley behind Arodes via Pittokopos. We briefly visited Kannaviou Dam which had very little bird life and then drove through the Sarama valley to finish at Evretou Dam. The call of European Bee-eater was the sound track of the day as they passed over heading south in large numbers – some of them passing low over us or perching on low trees by the side of tracks meaning we had plenty of opportunities to enjoy their vibrant colours.  Other highlights included a couple of male Red-backed Shrike, at least two European Golden Oriole, a Common Hoopoe, several Cyprus Wheatear, a male and a female Black-eared Wheatear and a couple of Black Francolin. Two Long-legged Buzzard were the only identifiable large raptors although a probableBonelli’s Eagle was seen above Arodes before disappearing into the haze. Juvenile Red-backed Shrike and Spotted Flycatcher were everywhere we went as were many Willow Warbler. 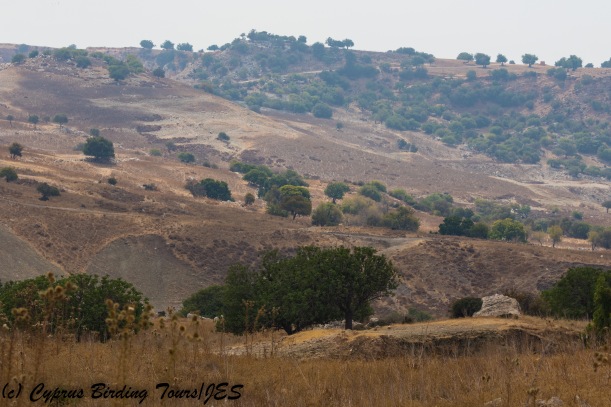 Seen in the Akamas area today were: 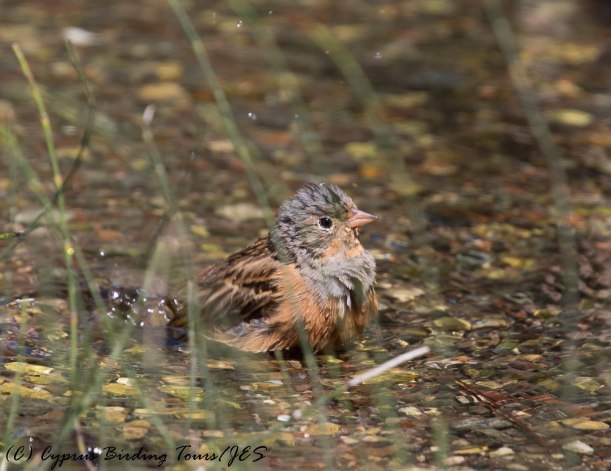 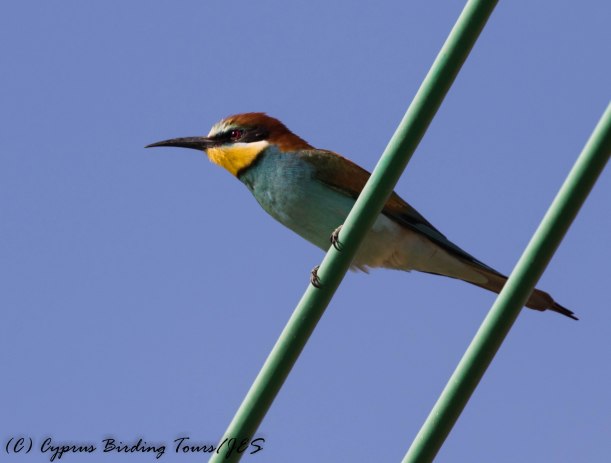 Plenty of Lesser Grey Shrike in the Akamas area this morning with several Red-backed Shrike, a Whinchat, Eastern Orphean and Willow Warbler, Cretzschmar’s Bunting, Hoopoe, Red-rumped Swallow, Lesser and Common Whitethroat. Off shore at Latchi were several flocks of Purple Heron throughout the day totalling over 200 individuals, a few Grey Heron, three Squacco Heron, seventeen Black-crowned Night Heron, over 200 Garganey and ten Northern Pintail. At Droushia nearly twenty Alpine Swift passed over at midday and at dusk a European Nightjar and two Scops Owls were near Smygies picnic site.

A delayed start to our day due to a nasty accident on the road to Polis, meant that Janice and I headed quickly to the area behind Neo Chorio village and the Smygies picnic site. The first of several small flocks of European Bee-eater that we would find throughout the day passed over our heads continuing their journey northwards.  The only other passage migrant we found there was a Spotted Flycatcher.  We did however get great views of several migrant breeders – plenty of Cyprus Wheatear, a male Masked Shrike and at least four Cretzschmar’s Bunting. The Cretzschmar’s could be heard singing throughout the area and one very kindly flew and perched on a bush next to us.

We drove to the deserted village of Androlikou finding several European Roller as we passed the gorge. There were yet more Cyprus Wheatear and migrating Bee-eater as well as a Woodchat Shrike. We spent a while watching a calling Eurasian Hoopoe outside the village. It was oblivious to us as we amazed at its ability to call and hold a caterpillar in its bill at the same time. Behind Arodes village we found more Rollers, several family parties of Sardinian Warbler and a couple of Spanish Sparrow.  There was also both a male and female Red-backed Shrike but the stars of the area were two singing Black-headed Bunting.

Another Black-headed Bunting was on the wires outside the village of Kathikas as we passed through it to Kannaviou Dam. The only waterbird on the dam was a single Little Grebe but that wasn’t the reason for our visit there. The area is great for migrant breeders and we were not disappointed finding Eurasian Turtle Dove, more migrating Bee-eaters, Red-rumped Swallow, House Martin, many Cyprus Wheatear, several singing Eastern Olivaceous Warbler, Masked Shrike, Cretzschmar’s Bunting and another Black-headed Bunting. We also found a Coal Tit – one of the Cyprus endemic sub-species.

As we drove back to Latchi to return Janice to her hotel, we stopped for a quick view over Evretou Dam. A lone Yellow-legged Gull flew around the shallow end and one of the long staying Northern Pintail was still there.  No other birds to add to our day list which includes great views of most of Cyprus’ migrant breeders.

For the second day out with Pauline and Michael we decided to concentrate on the area north of Paphos with which Pauline was already familiar. Driving to the Baths of Aphrodite we spotted a Wryneck on a roadside bush but it was frightened off by a speeding pick up driving near us. Walking around the Bath’s of Aphrodite Caravan Park we were treated to a brief glimpse of a Bonelli’s Eagle over the top of the ridge and found a female Subalpine Warbler, two Wood Warbler, many Blackcap and Lesser Whitethroat and a Masked and Woodchat Shrike in the bushes.

Around Smigies and Neo Chorio we found another Woodchat Shrike, more warblers, heard a couple of Common Nightingale and saw Cyprus Wheatear and Serin. A Common Buzzard seemed to be migrating over the area.  Low cloud and a strong wind spoiled our visit to the gorge behind Arodes village and there were no raptors flying but we did find two pairs of Great Spotted Cuckoo and of course many Western Jackdaw breeding on the cliffs.

We headed to Akoursos where we heard several male Cyprus Warbler but had to wait over thirty minutes for one to finally brave the wind and sing out in the open. We finished the day at Kannaviou where we added the endemic sub-species of the Coal Tit to the day’s list and had great views of two Masked Shrike near the car while we had a late afternoon coffee.

The total number of species seen on 24th March and 7th April combined was 65 which was pleasing as we did not visit any wetland locations.