After picking up Carole, John and Philip from Pissouri Bay we headed towards Akrotiri for a day’s birding. Our first stop was at Kensington Cliffs where we had good views of Eleonora’s Falcon and their acrobatics. A ring-tailed Harrier was flying close to the cliffs but we couldn’t get any ID features. As we left we saw an Isabelline Wheatear. At Phasouri Reed-beds we visited the new tower hide and were treated to the wonderful sight of several European Bee-eater coming down to drink at a nearby pool. Two juvenile Montagu’s Harrier were flying around the area as was a female Western Marsh Harrier. We also saw a European Turtle Dove and a couple of Willow Warbler before our attention was drawn to a Eurasian Hobby over us and then a small group of larger raptors gaining height – European Honey Buzzards and a lone Black Kite. We then found a Lesser Grey Shrike, a European Roller and a small flock of Western Yellow Wagtail near the other new hide. A couple of Whinchat and a very smart male Red-backed Shrike were also present.

Driving across Akrotiri Gravel Pits we saw a couple of juvenile Red-backed Shrike and a juvenile Masked Shrike and at the churchyard we found a Common Hoopoe, Spotted Flycatcher and a Northern Wheatear. We then spent some time at Bishop’s Pool. Disappointed not to see any Ferruginous Duck there but we did see a European Honey Buzzard being mobbed by two Eleonora’s Falcon, a Black-winged Stilt, a couple of Little Egret, a Common Redshank, some Northern Shoveler and Common Teal and an immature marsh tern which in the end we ID’d as a Whiskered Tern.

There were plenty of Kentish Plover and Little Stint on Lady’s Mile although we couldn’t see any other waders but there was a juvenile Greater Flamingo there. We spent a while then in the hide at Zakaki Marsh where we could hear several Black-crowned Night Heron – none of which was obliging enough to fly up to let us see them. We did though see a juvenile Western Water Rail and a Common Kingfisher although unfortunately only I saw a Great Reed Warbler sitting on the reeds with a large dragonfly in its bill. Two Western Marsh Harrier were quartering the area.

We ate our lunch back at Phasouri Reed-beds where we watched many Red-rumped Swallow migrating through. We added Lesser Kestrel to our list of species as one flew over head and saw a few more European Honey Buzzard and another juvenile Montagu’s Harrier. We then decided to head to Mandria to see if the Eurasian Dotterel that had been found there yesterday was still present. We were in luck and we spent some time looking at it through the ‘scope. It was surrounded by Greater Short-toed Lark so we had good views of them as well and also the Northern Wheatear and Lesser Grey Shrike nearby. We finished our day with a quick check of the amenities area of Asprokremmos Dam and added Long-legged Buzzard to our day list and also found another European Turtle Dove.

A good selection of species on a very hot September day. 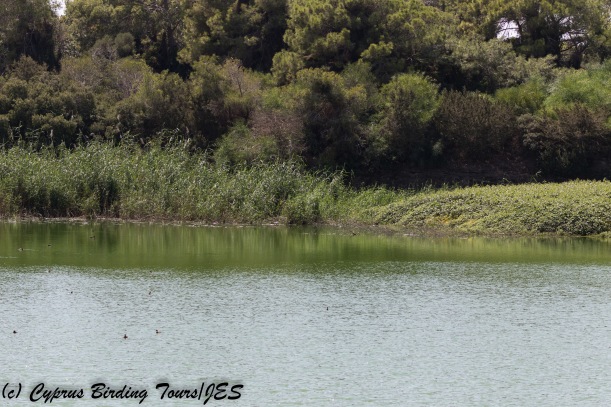 Some good birds seen around the area of Larnaca Salt Lake both north and south of the airport today, which included the famous black Greater Flamingo which today was on the main Salt Lake. Waders of note included eight Pied Avocet, four Eurasian Dotterel, two Whimbrel flying offshore, three Red-necked Phalarope, more than thirty Common Greenshank and plenty of Black-winged Stilt. Several migrating Grey Heron and Little Egret were around and three Squacco Heron went east along the coast in the morning with a flock of sixteen Great Egret flying over the area just before 9 am. There were several Slender-billed Gull on the main Salt Lake where there was also a European Roller and four European Bee-eaters flew over heading north. Eight Garganey were on the Larnaca Sewage Pools and a few Eurasian Teal still remain from the winter.

The fields were full of Red-throated Pipit and Yellow Wagtail early in the morning with several Greater Short-toed Lark and I  found one Eurasian Wryneck. I also saw two Western Marsh Harrier and a female Pallid Harrier. 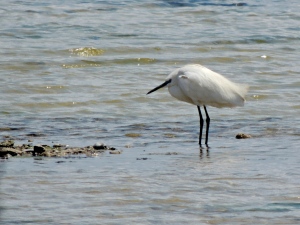 Some good birds around the Larnaca area seen on both an early morning and later afternoon ‘drive around’. I thought the days highlight would be a male Golden Oriole I found when doing my Common Bird Survey at Mennogeia until I found a Eurasian Dotterel on the Larnaca Airport Fields late in the day.