Numbers of ducks decreasing but still good numbers of Northern Shoveler and Common Teal as well as 24+ Black-necked Grebe, a pair of Gadwall, some Eurasian Wigeon and Common Pochard. More than 1000 Greater Flamingo in the area, although no sign today of a melanistic one seen yesterday, as well as nearly 1000 Common Shelduck on the main Salt Lake. A couple of hundred Slender-billed Gull were on the Salt Lake as well as some Caspian and Armenian Gull and plenty of Black-headed. But the best was an adult Pallas’s Gull in full breeding plumage in the north-east corner together with a Baltic Gull, two Heuglin’s Gull and a Mediterranean Gull. Waders included at least 16 Common Snipe, five Ruff, a few Eurasian Stone Curlew and hundreds of Dunlin and Little Stint.

The only spring migrants I saw were some Barn Swallows, an Isabelline Wheatear (see photo) and a Common Hoopoe. I then went along the coast towards Agios Theodoros where the Great Grey Shrike (probable aucheri intergrade) was still present and I managed to get a view of one of two Short-toed Snake Eagle that have also been in that area for a few days. 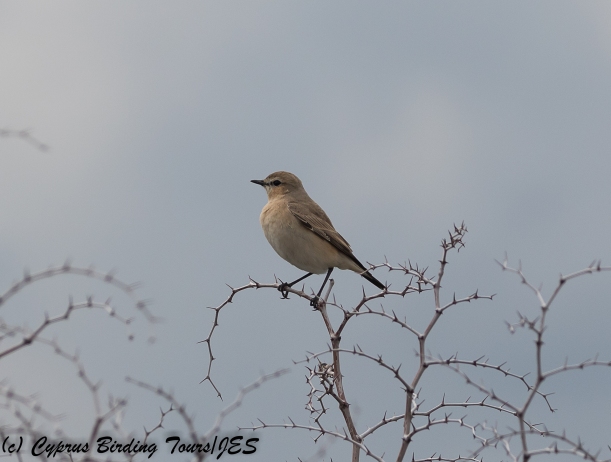