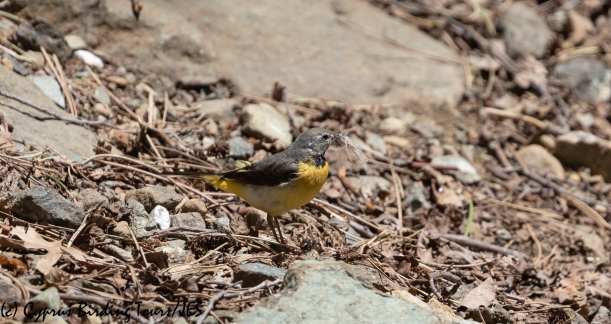 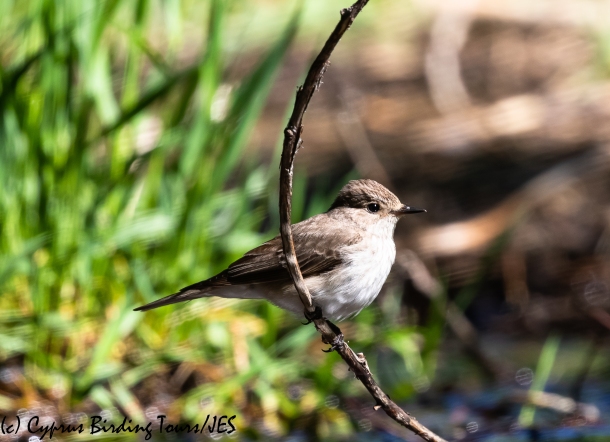 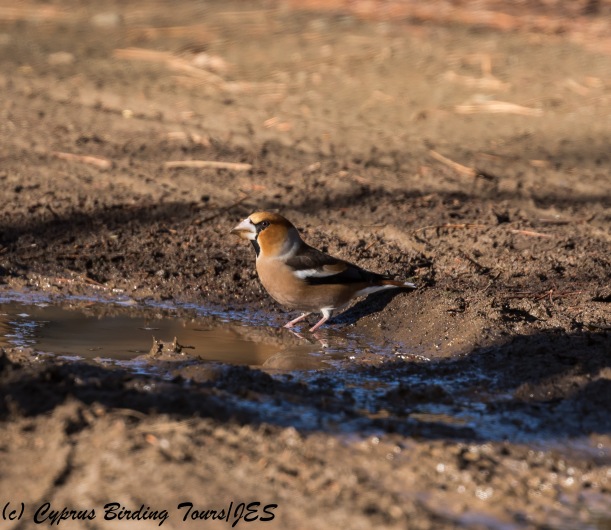 Start of the autumn season with a morning’s guiding with Jonathan, looking for Cyprus endemics in particular and anything we could find in general, bearing in mind the time of year and the heat! In the end, we had no luck with the Cyprus Warbler – apart of one possible flying out of and then disappearing into bushes at Petra tou Romiou but found plenty of Cyprus Wheatear – both adults, juveniles and newly fledged and had good views of the Coal Tit and Short-toed Treecreeper – both endemic sub-species.

Starting in the village of Kouklia where we checked out the small Laughing Dove population now doing well there and were surprised to also see a European Turtle Dove in the village. Late or migrating Common Swift were heard overhead. Moving inland from the village towards Oreites we had good views of European Roller and saw the first of many Masked Shrike and Cyprus Wheatear – there were many adults and juveniles around of both species all along our route. Further on towards Archimandrita we had good views of an Olivaceous Warbler in a pine tree and three European Roller flying around making a lot of noise.

We were pleased to find one Cretzschmar’s Bunting feeding by the side of the road as we headed towards Dora and a bit further on a family group of the same species. Red-rumped Swallow and Barn Swallow were overhead and then Jonathan spotted a European Bee-eater in the distance. We could hear them calling but it took us a while to relocate them.

Stopping for a coffee under some pine trees near Tzelefos Bridge we saw and heard several Coal Tit and Jonathan remarked how different they were from the ones he saw at home in the UK. By the stream at the start of the Mylikouri trail were several Short-toed Treecreeper – another of the Cyprus endemic sub-species but we didn’t come across any Jays – especially as there were many people around the area near the bridge where I had expected we should find one. We added Spotted Flycatcher, Northern Wren and Common Chaffinch to the day list. Two birds of prey appeared over a ridge as we left the area but dropped down before we could get our binoculars on them – more than likely Long-legged Buzzard but we weren’t sure enough to add them to the day list and they didn’t reappear.

It was now getting very hot and there were few birds out and about in the Omodos vineyards. We heard more European Bee-eater and saw more Masked Shrike, Cyprus Wheatear, Red-rumped Swallow and Sardinian Warbler.

We finished at Petra tou Romiou for a last look for Cyprus Warbler. We saw a likely candidate flitting around nearby bushes but didn’t have good enough views to confirm ID. We did however see three Eleonora’s Falcon flying around the area which was some compensation. Thanks to Jonathan for an interesting morning out. 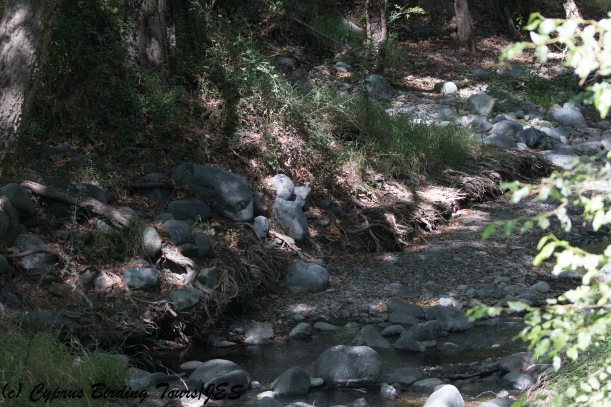 Spent the day visiting several of the Troodos picnic sites which are usually a good area to find migrant and resident breeders and find some endemic sub-species. Some of the plumage of the breeding birds was looking very worn. 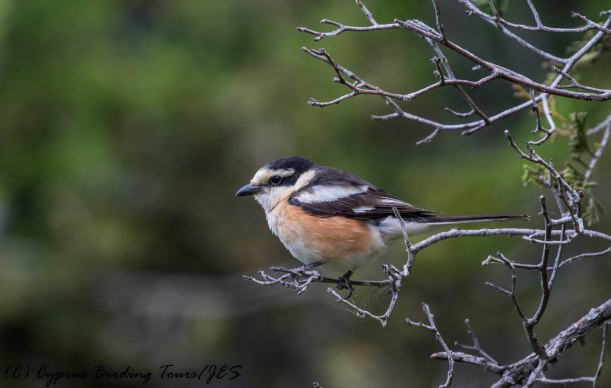 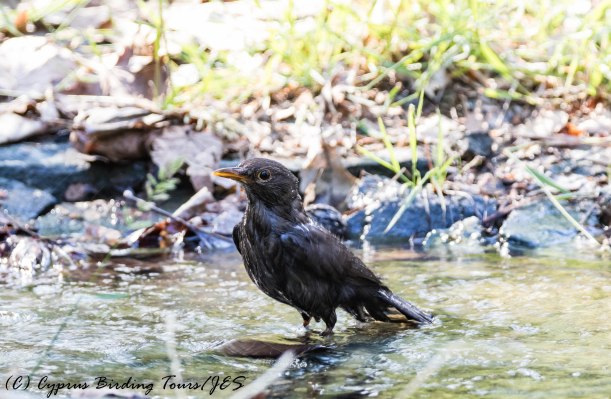 I picked up James and Lizzie from Kakopetria and we headed towards Troodos stopping at a few locations on the way to the Square. At Platania we found Red-rumped Swallow and at the Botanical Gardens at Amiantos we found our first of the Cyprus endemic sub-species – the Eurasian Jay as well as a large group of hirundines which although mainly Northern House Martin also included several more Red-rumped Swallow and two Eurasian Crag Martin. An Eastern Olivaceous Warbler sang out in the open on a small conifer so we spend some time watching it. A couple of male Cyprus Wheatear were also seen and at least one male Eurasian Blackbird was singing. As we left the area I spotted a large thrush on a rock and we were pleased to see a male Blue Rock Thrush as we got out of the car. I also heard a singing Cretzschmar’s Bunting but we couldn’t see it.

We then spent some time at the Livadi tou Pashia picnic site where we had good views of two other endemic sub-species – Coal Tit and Short-toed Treecreeper. Several Northern Wren and European Serin were heard and finally a male Masked Shrike flew into view. We then headed to Troodos Square seeing more Masked Shrike and Cyprus Wheatear on the way. At least eight Pallid Swift were in a large flock of swifts at the square.

The rest of the morning was spent in the Omodos area and especially on the road from there to Agios Nikolaos. The stars there were the singing male Black-headed Buntings but we also saw some Corn Bunting, more Masked Shrike and Cyprus Wheatear, a smart male Spanish Sparrow and finally a singing male Cyprus Warbler – strangely singing from some electricity wires. The last species for the day was Cretzschmar’s Bunting as we found two males near Agios Nikolaos.

A lovely way to spend a morning in the early summer catching up with the Cyprus endemics and migrant breeders. 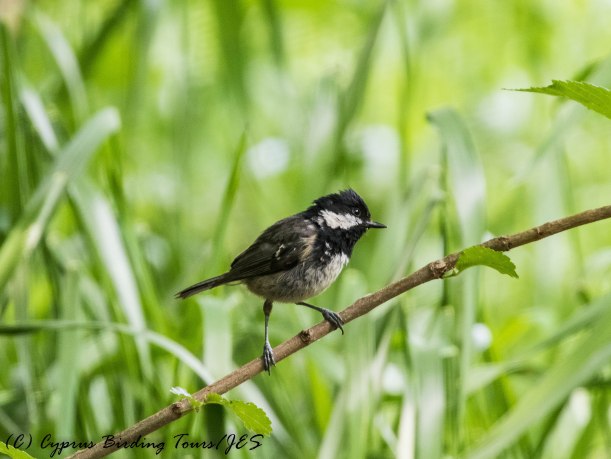 All the usual suspects at Troodos today – plenty of Coal Tits, Winter Wren, Short-toed Treecreeper, Eurasian Jay, Common Chaffinch and Eurasian Blackbird. Of more interest was a male Yellowhammer and a Mistle Thrush at Almirolivado, two Goldcrest at Livadi tou Pashia and at least twelve European Siskin at Platania.

Photograph below of a Coal Tit at Livadi tou Pashia. One of the Cyprus endemic sub-species.

Spent yesterday and today around Kalopanagiotis and Troodos. Plenty of European Serin and Winter Wren heard around the river bed at Kalopanagiotis as well as a couple of male Blackbirds, a Cyprus Wheatear and plenty of Chaffinch. After sunset there were at least fifty House Martin flying over the village.

This morning near the Venetian Bridge at Kalopanagiotis I found a juvenile Grey Wagtail and was pleased to find evidence of breeding again this year. Plenty of Eurasian Jay around the Mount Olympos and Troodos cafes picking up scraps and stale bread. Several male Masked Shrike and adult Cyprus Wheatear were still in the area as well as  two Common Swift  flying over. Plenty of Coal Tit and Short-toed Treecreeper were heard but only a few were seen. At Moutoullas there were around six Red-rumped Swallow and a Eurasian Crag Martin as well as more House Martin and plenty of Barn Swallow.