Yesterday a Buff-bellied Pipit (spp. japonicas) had been seen at Akhna Dam but I had no joy finding it this afternoon although there were many Meadow Pipit and Water Pipit around. It was worth the trip to see the pale Booted Eagle that has been there the last week or so and was seen several times – usually being harassed by the local Hooded Crows. Also present was an immature Great White Pelican, a Common Redshank and a Greenshank, a Great Egret and several Grey Heron, Little and Cattle Egret. The bushes were full of Chiffchaff – at least twenty five in one small area.

The recent storms meant that there was some water at Oroklini Marsh and the waders have moved from the channels into a flooded area which was visible from the derelict houses there. Common Redshank, Northern and Spur-winged Lapwing, Dunlin, Little Stint and there out in the open – the Terek Sandpiper. A less than annual migrant this individual has been present for over a month now. Managed to get a few record shots of it – not great especially as it was getting dark. So pleased to see the Terek well that I didn’t notice the Common Snipe sitting behind it until I got home and checked the photos! 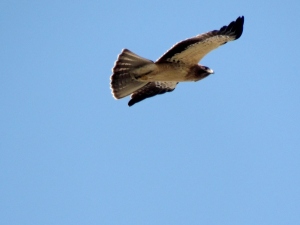 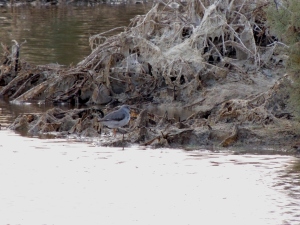