Michael had already seen some of his Cyprus target birds out birding before we met but we still had several to try and find on our day out. We visited Kouklia Soakaways, Asprokremmos Dam, Mandria, Agia Varvara and Anarita Park. We saw some interesting birds and had especially good views of an obliging male Cyprus Warbler near the Asprokremmos Dam who can and sang on bushes near us and a Great Spotted Cuckoo (one of at least seven in the area) at Anarita Park that walked along the track towards the car which we were standing next too.

We also found a Spectacled Warbler family at Asprokremmos; saw a pair of Stone Curlew at Kouklia where there were also at least two Great Reed Warbler and we had a fly past from a Long-legged Buzzard. A singing male Eurasian Blackbird was an unusual find. There were two Ortolan Bunting there and then another three at Asprokremmos Dam where we also found a Collared, Pied and Spotted Flycatcher and two European Bee-eater. On the water’s edge was a Purple Heron, a Black-winged Stilt and a couple of Great Cormorant.

Michael had hoped to see an Isabelline Wheatear and after finding a couple of female Northern Wheatear we were pleased to find a lone Isabelline Wheatear. We also found some Greater Short-toed Lark and a male and female Eastern Black-eared Wheatear. A male Black Francolin was very obliging, sitting on a small building out in the open and calling. As with everywhere else we visited there was at least one Woodchat Shrike and many Whinchat.

Although one of the soakaways at Agia Varvara had water we only managed to find a Wood Sandpiper so we moved on to Anarita Park. We were treated to at least twelve Lesser Kestrel and a male Montagu’s Harrier as soon as we arrived and moving into the area we also found a Little Owl, a couple of European Roller, a female Red-footed Falcon and a Wryneck. Our last target bird for the day was a Great Spotted Cuckoo and we were in for a treat. Not only did we find at least seven (and definitely no double counting!) in the fields near the rubbish tip but one of them decided to feed on the track where we were parked moving slowly towards us completely oblivious of our present. A really great end to a good day’s birding. 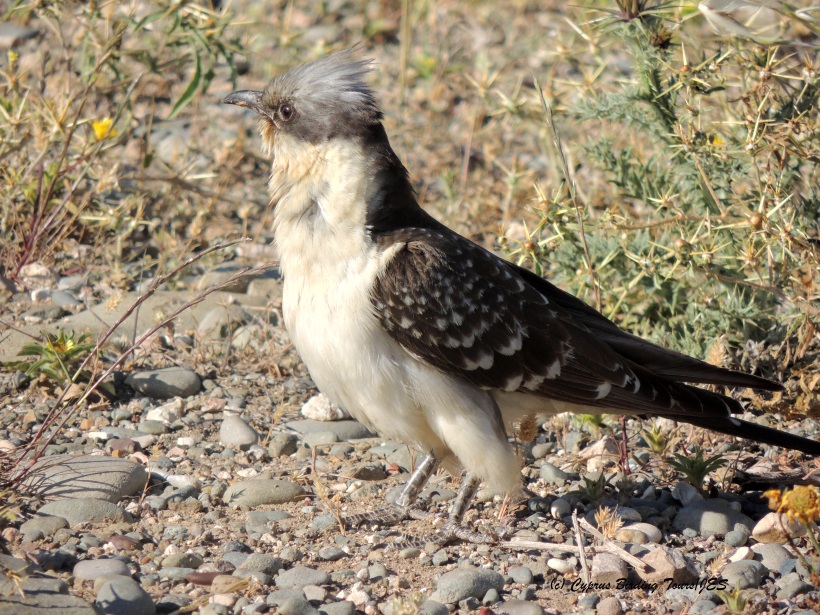