It was good to see Brian again who I had first taken out in late 2013. We spent the day around Akrotiri and managed several lifers for him plus a Cyprus rarity – a shrike from the Southern Grey complex which on first thoughts would appear to be of the elegans race.

We started at the channel opposite the port where we found a Squacco Heron, two Little Egret, a Common Kingfisher, several Eurasian Reed and Cetti’s Warbler and Lesser Whitethroat. We searched the area for one of the Laughing Doves that seem to be colonizing the port area but with no joy. Moving onto the hide at Zakaki Marsh, Brian immediately picked out a male Little Crake in the reeds near the hide. It dashed back into the dense reeds and refused to come back out. Two Ferruginous Duck were on the water and a couple of Sedge Warbler were in front of the hide. Eurasian Reed and Cetti’s Warbler were also here. On Lady’s Mile we found our only Greater Flamingo – a juvenile bird. There were several Kentish Plover on the mud flats there as well as a couple of Little Ringed Plover, Little Stint, Dunlin, a Curlew Sandpiper, six Common Redshank, an unexpected Greater Sand Plover and a single Greater Short-toed Lark . Near the football ground we found four Tawny Pipit and several Eastern Black-eared and Northern Wheatear.

Moving to the east side of the Salt Lake behind Lady’s Mile we found Isabelline and Cyprus Wheatear as well as several more Eastern Black-eared Wheatear. While Brian was taking photos of the wheatears I spotted a grey shrike nearby. Realising that it was a bit early for a migrating Lesser Grey Shrike I spent some time watching it through the scope and both of us got several photos as did local birder Tony who was also birding in the area. The bird was from the Southern Grey Shrike group and first indications are that it is of the elegans race, although subsequent checking of photos may change this!

We then headed over to Akrotiri Gravel Pits and ate our lunch near the church there. We were joined by several Lesser Whitethroat, a Common Whitethroat, a couple of male Eurasian Blackcap and some Chiffchaffs. A male Cyprus Warbler was seen in display flight and singing behind the garden there. Travelling across the Gravel Pits we saw more wheatears and added Whinchat, Eurasian Pied Flycatcher, Woodchat and Masked Shrike, Eurasian Hoopoe , Common Nightingale, Black-winged Stilt and oddly a single Corn Bunting resting in a tamarisk, to the day’s ever growing list. A ring-tailed harrier was too distant to identify but we did see Western Marsh Harrier and Common Buzzard at closer quarters.

We drove past the burnt Phasouri Reed-beds. We heard a calling Black Francolin but it would not come out in the open for us to get better views. Singing Common Chaffinch and European Serin were heard near the Cat Sanctuary. We moved over to Kensington Cliffs where Brian had hoped to see and photograph Alpine Swift. At first we thought he would be unlucky but then we were treated to an aerial display by five of them. On the distant cliff face I found a Eurasian Griffon Vulture but no others were seen flying. A flock of nearly fifty migrating Great Cormorant flew east over the bay. A lone Cyprus Wheatear was at the nearby Stadium.

We returned to the hide at Zakaki to see if the Little Crake would appear and we were not disappointed as this time a female was seen albeit briefly. A Great Reed Warbler was also seen as was a Green Sandpiper. As earlier we heard Water Rail but it didn’t come into view. Neither did either of the two calling Black Francolin. Three Eurasian Hoopoe flew over the area and the last new species for the day was Grey Heron as fly flew east in the distance.

A very enjoyable day’s birding with the good variety of species that Akrotiri can often provide. 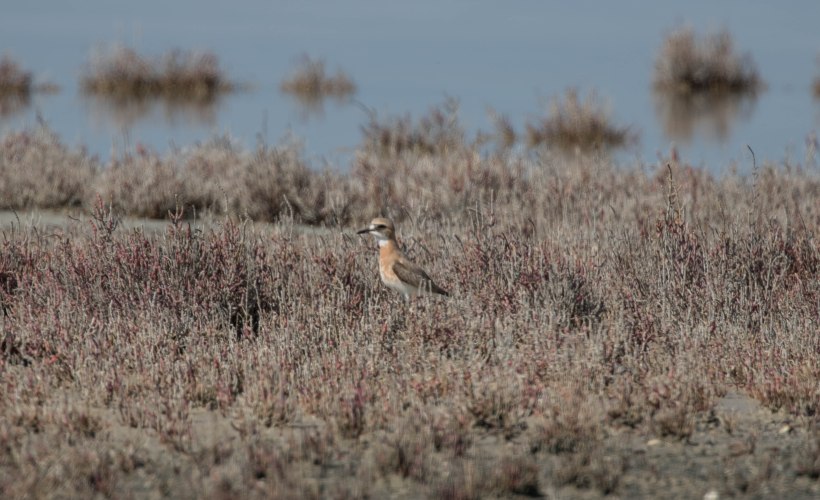