A morning around a few Paphos sites with Stephen and Lorraine. The main target species was the wintering Finsch’s Wheatear but first we headed to Paphos Headland for a short walk to track down the Greater Sand Plover that winter there. They were not easy to find this morning but eventually we found three of them feeding close to the water’s edge. A fly-by first winter Mediterranean Gull was a surprise – never seen in Cyprus in large numbers it is rarely seen in the west of the island. Twenty ducks flew offshore heading SW which we decided were probably Northern Pintail. Other wintering waders were good Cyprus birds although familiar to British birders – around fifty Eurasian Golden Plover, a Whimbrel and two Ruddy Turnstone. Small flocks of Eurasian Skylark were flying around as were European Goldfinch and Common Linnet – and of course there were plenty of Common Stonechat.

We then headed inland to check out Anarita Park which is a well-known wintering site for Finsch’s Wheatear. We quickly found a female flitting between rocks and plant stalks and after some perseverance we had good views of a male in another area. We also saw three Little Owl and several Woodlark. Our last stop was at the Paphos Sewage Plant where the fields were full of Meadow Pipit. Eighteen Northern Lapwing were feeding in a recently harvested field and two Spur-winged Lapwing also found. Large flocks of Common Woodpigeon were flying around. We found a Western Black Redstart in the olive trees as well as wintering European Robin and Common Chiffchaff.

Although most of the species seen on a Cyprus winter’s day were well known to Steven and Lorraine, our great views of Greater Sand Plover, Finsch’s Wheatear and Spur-winged Lapwing made up for that. 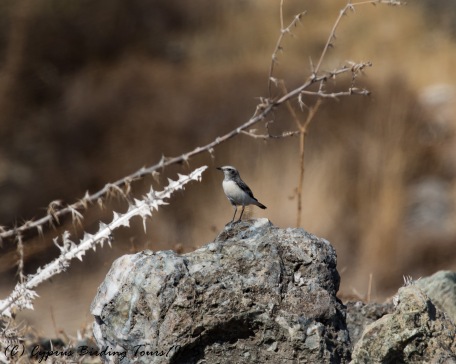 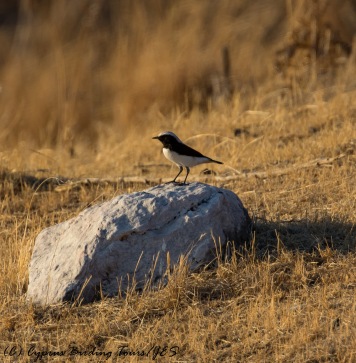