Out doing the waterbird count today but the best bird was an immature Audouin’s Gull at Oroklini Beach which I visited after I’d finished (see heavily cropped photo). 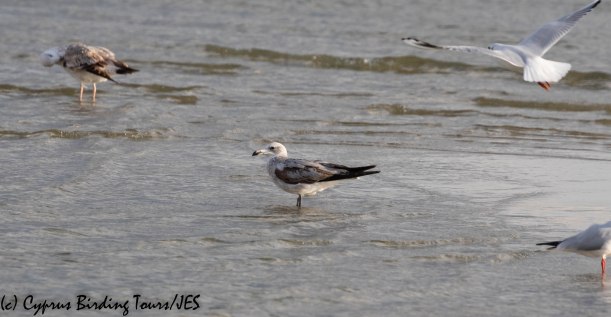 Although at first it didn’t look very promising at Phasouri this morning, things picked up slowly and I managed to get a good list together including a nice surprise in the shape of a juvenile Lesser Spotted Eagle (see cropped record shot). Other birds seen include: 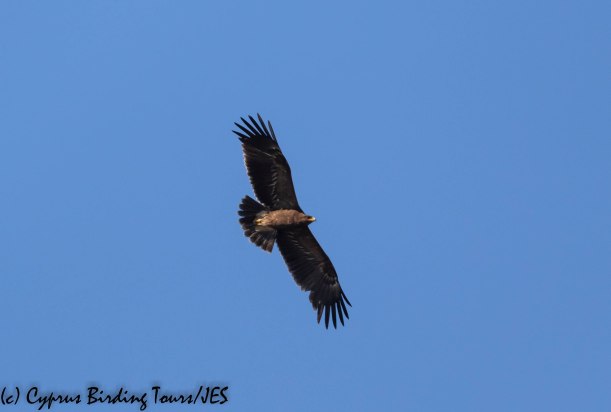 Finally a sunny day with not a lot of wind and no rain coincided with a day I was free to go out. Went to the east again and checked out Oroklini, Achna, Paralimni Lake and the rocky coasts. A good collection of birds including Greater Flamingo, Greater Sandplover, Grey Plover, Slender-billed Gull, Audouin’s Gull, Blue Rock Thrush, Peregrine Falcon, several Western Marsh Harrier, Great Crested Grebe, Northern and Spur-winged Lapwing and Black-winged Stilt.

Photos of one of the Grey Plover and Greater Sandplover that were at Agia Trias, Paralimni 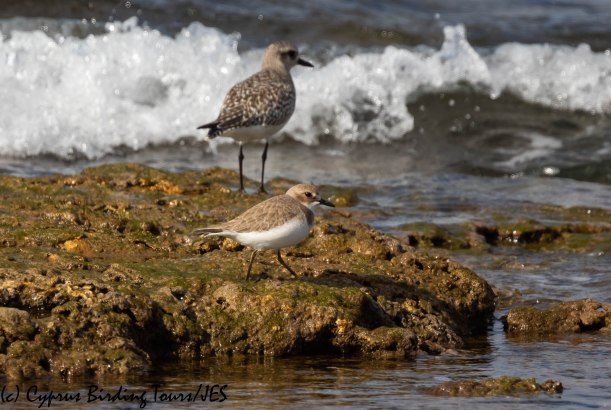 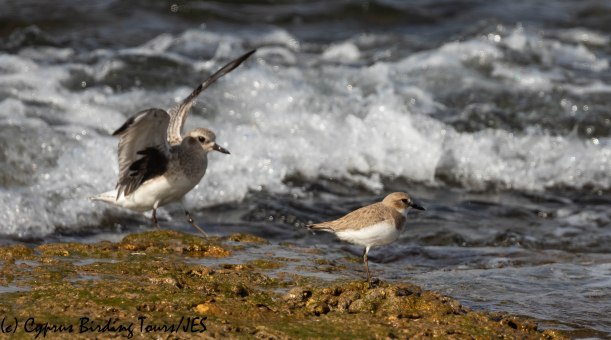 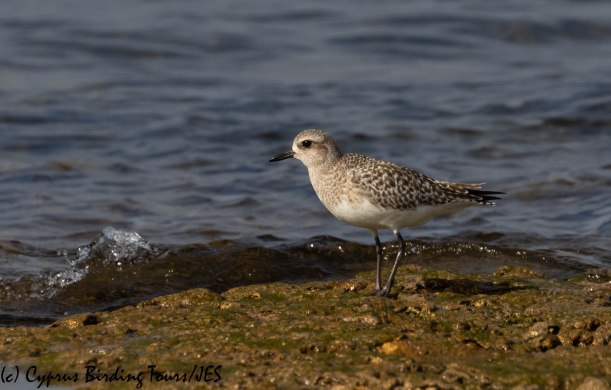 Back after a few weeks away and spent the day on the east of the island. All wetlands now have a lot of water and from the weather forecasts more is to come. Visited Oroklini, Akhna Dam, Paralimni Lake and the coastal sites of Agios Trias, Kermia and Macronissos Beaches. Highlights were: 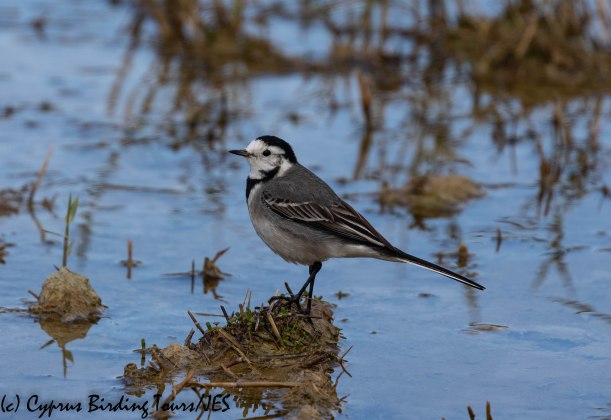 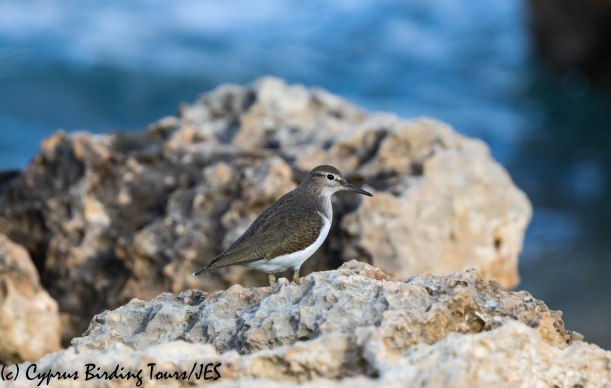 A good day around Akrotiri with highlights two Spotted Crake, a juvenile Common Crane and three Little Swift plus my first Bluethroats, Common Stonechat and Common Buzzard of the winter. Raptor migration has slowed to a trickle but I did see small numbers of Red-footed and Eleonora’s Falcon, Eurasian Hobby, European Honey Buzzard, Western Marsh Harrier and a single Osprey. 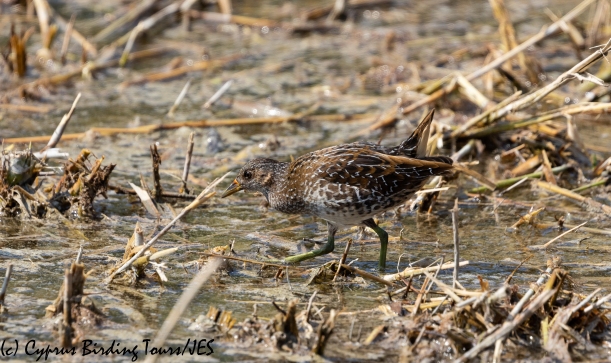 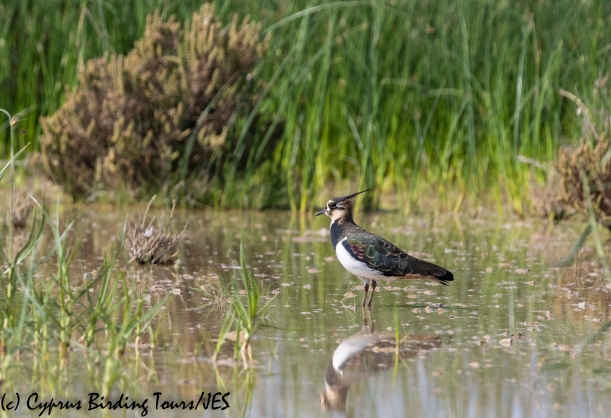 Back in Cyprus after a few weeks away and time to get the 2018 year list under way. Visiting Manglis Lake and Agios Sozomenos in Nicosia with the Black-necked Grebe I found at the former in mid December still present and good views of Long-legged Buzzard, Bonelli’s Eagle, Little Owl and Finsch’s Wheatear at the latter. 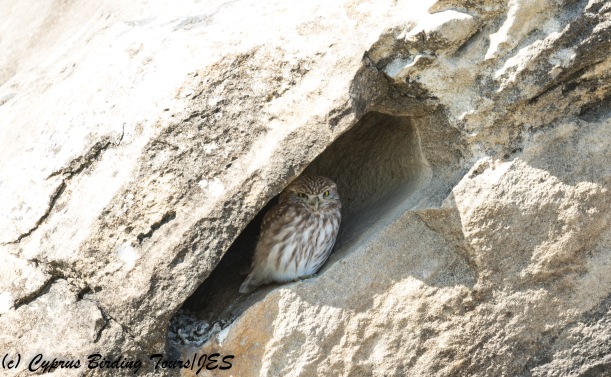 Best bird was an immature Bonelli’s Eagle (see photo) being mobbed by a Common Kestrel but also saw three Finsch’s Wheatear, a female Blue Rock Thrush and a singing male Spectacled Warbler. There were many Eurasian Skylark, Red-throated and Meadow Pipit in the fields as well as a large flock of more than 80 Northern Lapwing (see photo). 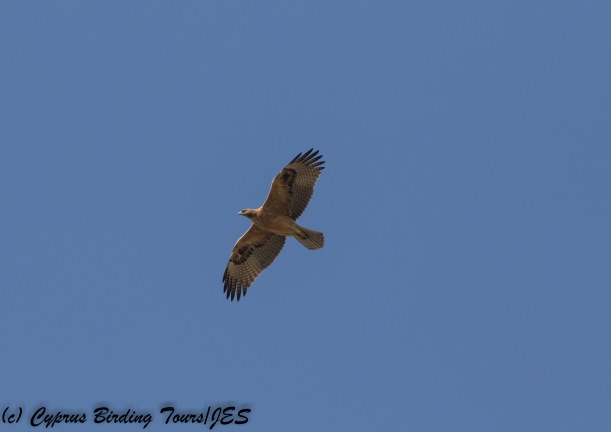 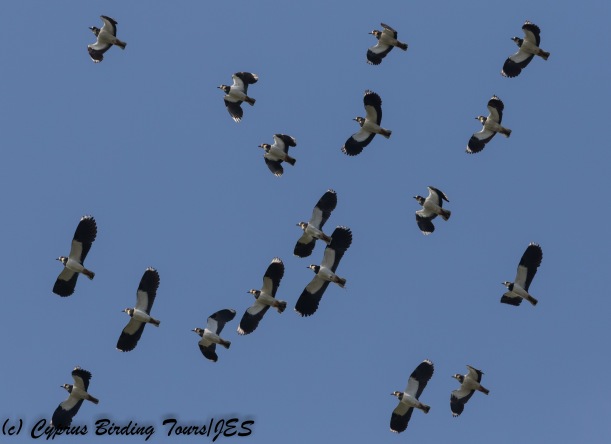 Spent much longer out birding than I had originally intended but it was worth it with the best birds being a sub adult Bonelli’s Eagle, two Long-legged Buzzard, three (maybe four) Finsch’s Wheatear, Red-throated Pipit, Spotted Crake, Water Pipit and a female Merlin which scattered the waders at Oroklini Marsh. 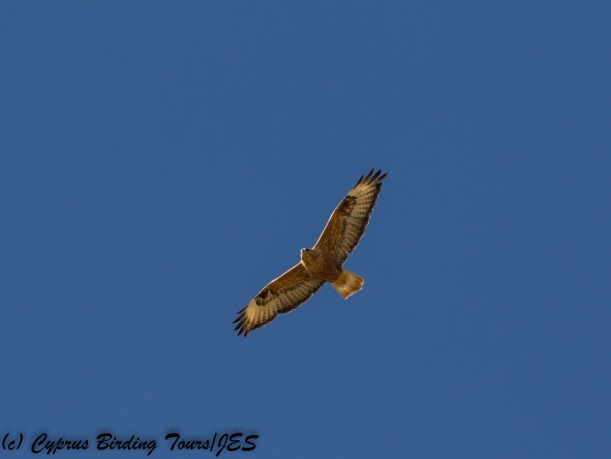 Visited Achna Dam and Oroklini Marsh this morning after yesterday’s rain. Birds around included Hen and Western Marsh Harrier, Great Egret, Spur-winged Lapwing, Common Snipe, Common Kingfisher, my first Meadow Pipits of the winter and a Bluethroat. Photos of a female Northern Pintail and a Western Marsh Harrier from Achna. 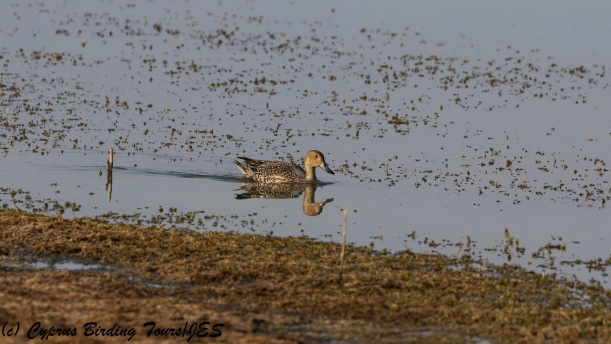 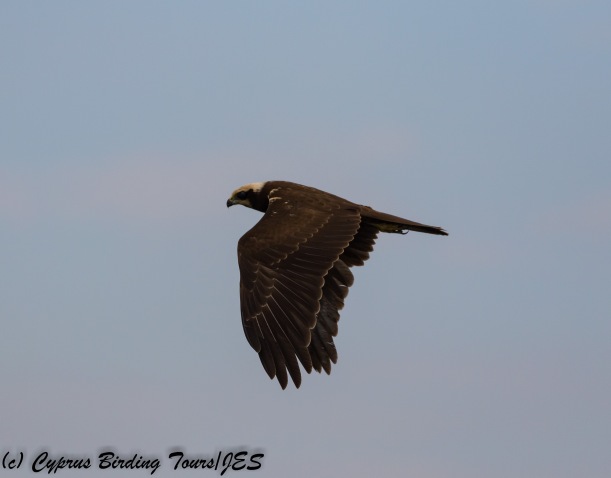 More Common Crane migrating over the island today. Over 50 reported over Tala, Paphos while I had 95 over Achna Dam around 9:30 this morning. Also at Achna were: 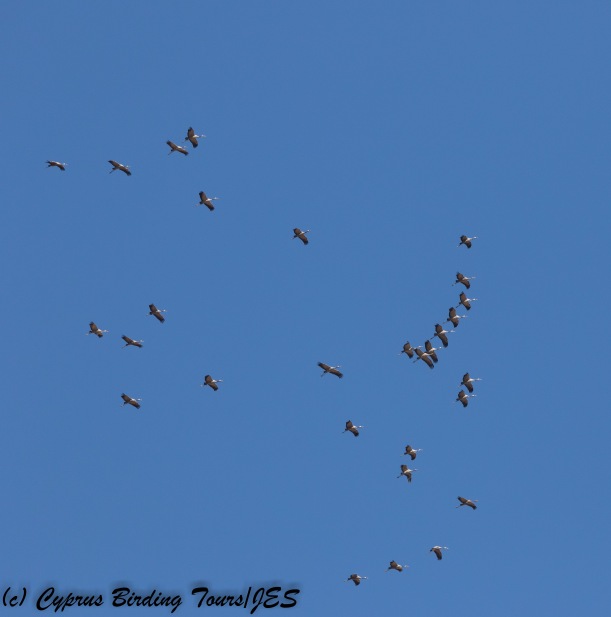 Peter, Pat, Paul and Janet were staying in Nicosia so we had a bit of a drive before we could start our morning’s birding. We headed to Achna Dam where water levels are still good and where I had seen some good birds on a trip there last week. We spent some time there getting good views of three Great White Egret, an immature Whiskered Tern, a Common Kingfisher and two Northern Pintail. A group of five Glossy Ibis feeding on the far shore left the area after a while – probably continuing their migration south. Ten newly arrived Northern Lapwing flew into the area from the north. Several Cattle and Little Egret and Grey Heron were also present and a couple of Willow Warbler were feeding in the shorter reeds. As we returned to the car we spotted two Dunlin, a Little Stint and a Little Ringed Plover feeding in a muddy area. A juvenile Western Marsh Harrier was quartering the area and we saw it fly up from the ground with something in its talons. Unfortunately although we heard several European Bee-eater flying over the area they were too high for us to see.

We searched the rocky beach at Ormedeia for a Greater Sandplover but had no joy so we had to make do with a single Kentish Plover and three more Northern Lapwing. A quick stop at Oroklini Marsh enabled us to see a large group of almost forty Spur-winged Lapwing as well as a couple of Common Redshank, a Little Ringed Plover and a Ruff.

We finished our morning driving through the valley of Panagia Stazousa as we headed back to Nicosia. We were hoping that there would still be some Cyprus Wheatear around and we were not disappointed. At least four were still present and dutifully obliged by sitting out in the open on the top of low bushes. While watching one of them we spotted a juvenile Red-backed Shrike and when it flew further away we were pleased to also see a juvenile Masked Shrike in another bush. Several Whinchat were seen resting as they migrated through the island. We also had brief views of a Spotted Flycatcher and a female Eurasian Blackcap but a female Common Redstart was more co-operative and sat low in a shrub enabling us to watch her through the telescope. An unexpected bird to finish the morning on. A morning on which we managed to see a good variety of species – a few more than I had anticipated. 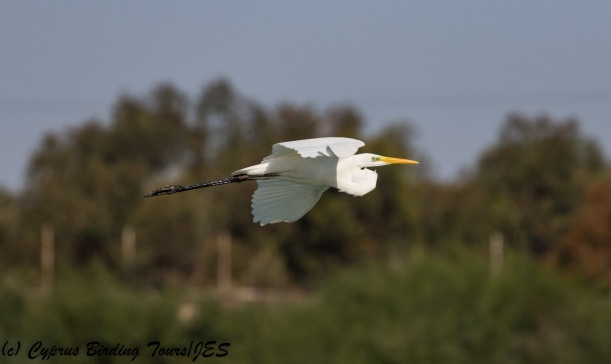 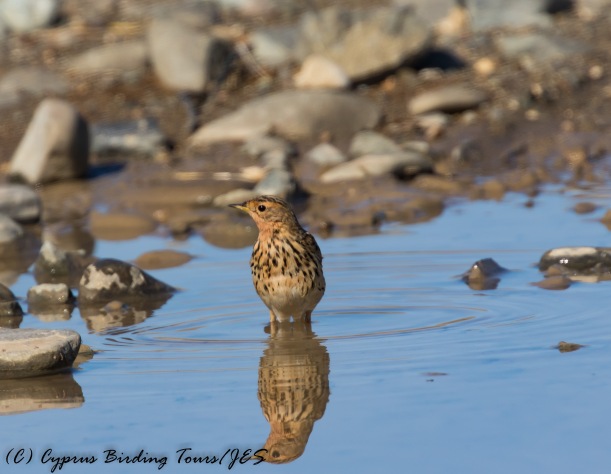 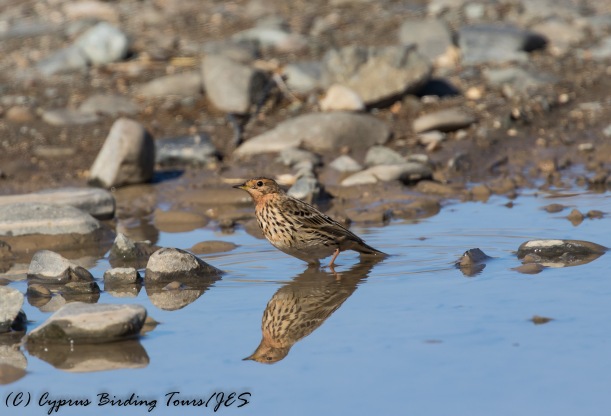