Spent most of the day doing the Waterbird Count around Larnaca today. Lots of Greater Flamingo and Northern Shoveler to count – and surprisingly also – it took time to count the Little Gull with just over 300 in the area feeding on several pools. Other interesting birds included three Pied Avocet, three Greater White-fronted Geese and 38 Black-necked Grebe. 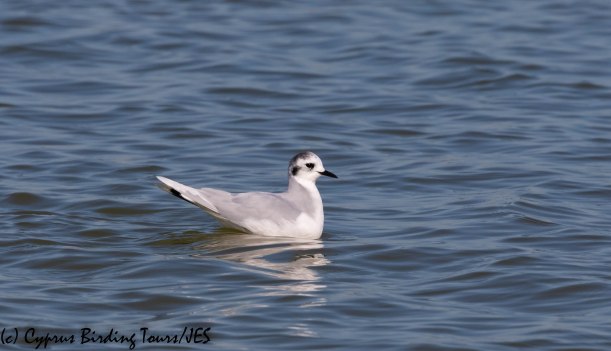 Out doing the waterbird count today but the best bird was an immature Audouin’s Gull at Oroklini Beach which I visited after I’d finished (see heavily cropped photo).

Evidence that winter visitors have been arriving at our wetlands the last few weeks with large numbers of Northern Shoveler (see photo), Greater Flamingo and Common Teal at the Salt Lake and Sewage Works. Also two each of Greater White-fronted Goose and Black-necked Grebe as well as four Common Pochard, a Eurasian Wigeon and two Northern Pintail. A small flock of Eurasian Golden Plover is already present as are good numbers of Eurasian Skylark and Meadow Pipit. 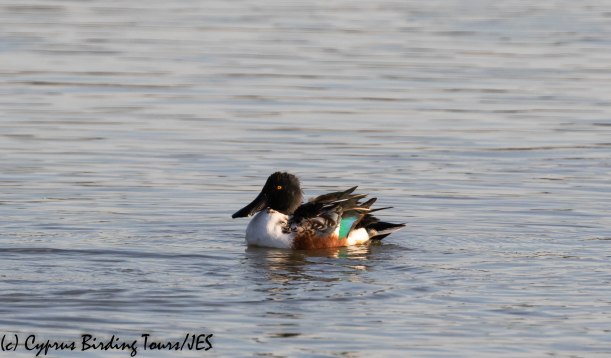 Visited Larnaca today where there was evidence of very heavy overnight rain in the fields and around the salt lake.

Not very many Greater Flamingos on the Salt Lake – less than 100 in the whole area. Numbers of ducks reduced on the Sewage Works pools from November but still plenty of Northern Shoveler, Mallard and Common Teal. More than thirty Black-necked Grebe have arrived for the winter but only four Greater White-fronted Geese – the numbers of those wintering here get less every year. A male Tufted Duck was on the pools as were five Common Pochard, 21 Ferruginous Duck, nine Eurasian Wigeon and four Northern Pintail.

Good numbers of Dunlin (see photo), Common Redshank, Little Stint, Common Ringed Plover and Kentish Plover as well as four Common Snipe, a Green Sandpiper and two Little Ringed Plover. A large flock of Eurasian Golden Plover and two Eurasian Curlew were in fields near the coast. Two Hen Harrier and two Western Marsh Harrier were hunting over the area. Plenty of Eurasian Skylark were in the fields. Offshore were four Sandwich Tern. Four Heuglin’s, some Caspian and a couple of Armenian Gull were roosting with the large group of Black-headed Gull on the Salt Lake.

A quick visit to Oroklini afterwards and I found a first winter Mediterranean Gull in with the Black-headed Gull and more Northern Shoveler and Greater Flamingo on the main lake. Two Merlin flew over the area and it was depressing to see 19 Spur-winged Lapwing roosting on a newly constructed road, part of an area that looks as if it is to be drained for housing. 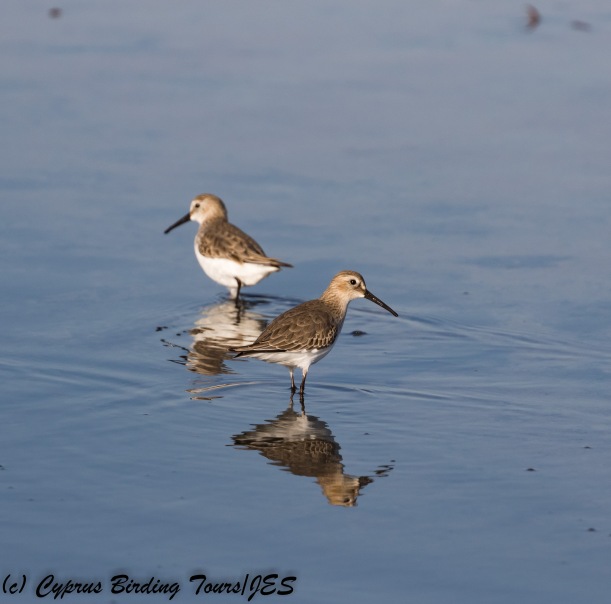 A windy morning by the coast south of the airport at Larnaca. Wintering ducks and gulls were around. 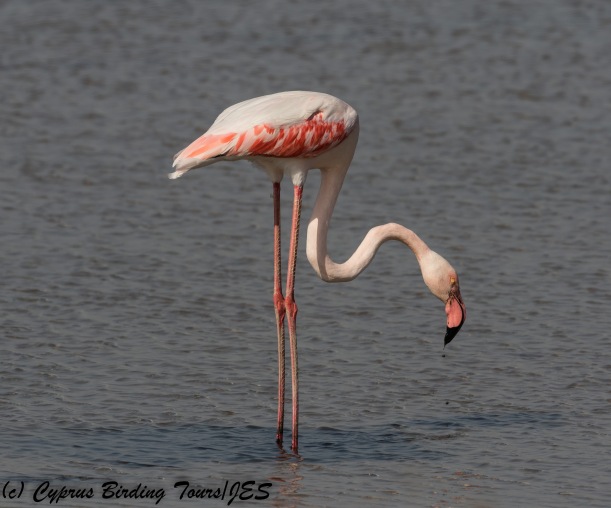 Some good birds and some warmer weather today at Larnaca. The flocks of Greylag and Greater White-fronted Goose and Ruddy Shelduck were on the Sewage Works pools as was a first winter Great Black-headed (Pallas) Gull. Three Eurasian Curlew and thirty Eurasian Golden Plover were on Spiros Pool with twenty Eurasian Wigeon. In the fields at Pervolia there were large flocks of Eurasian Skylark and also seven more Eurasian Golden Plover. I stopped on the road from Kiti to Petounta, at an area where I have found Calandra Lark in the past, and soon heard and saw three in display flight over the area.

More Eurasian Skylark at Petounta where there was also a Grey Plover and three Kentish Plover. Returning to the Salt Lake there didn’t seem to be as many Greater Flamingo as in mid January but still plenty of Common Shelduck, Common Black-headed Gull and small waders. A roosting flock of larger gulls was mainly Caspian Gull but there were also a few Armenian and Yellow-legged Gulls as well as two Heuglin’s.

At the Kamares area I found a Green Sandpiper, two Common Snipe (see photo), two Water Pipit, two Cattle Egret, seven Spur-winged Lapwing, a Grey Wagtail, many Common Chiffchaff, two Moustached Warblers and a Bluethroat. As I was leaving a larger bird on the grassy area caught my eye and I was very pleased to find my first Great Spotted Cuckoo of the year.

Out counting the waterbirds around Larnaca today was very enjoyable – not a lot of Greater Flamingos to count (last year there were 12000+ on this day!) – but lots of interesting birds including the largest flock of Greylag Geese in Cyprus for more than 30 years, five Pallas’ Gulls, two Common Quail, two Barn Swallow and plenty more. One of the Pallas’ Gulls was sitting at the north end of the Salt Lake with some Greater Flamingos (see record photo below).

Real winter’s weather for our day and a half out birding. Picking up Richard and Brad from Larnaca Airport midday Saturday we headed for Oroklini Marsh.  We spent time in both hides there and were out of the rain at least. On the Paralimni coast at Agia Trias we weren’t so lucky and a biting wind there cut our birding short, while the gathering gloom and storm clouds as we reached Makronissos Beach meant we could have done with a torch to help us find the birds. A chilly, cloudy start on Sunday found us in the hide at Larnaca Sewage Works and although we got quite cold in the wind, the weather improved as we got to the Salt Lake and the sun finally came out. We even managed to eat our picnic lunch outside in the Panagia Stazousa valley and stayed out until the sun set at Agios Sozomenos outside Nicosia.

A good day around the Larnaca area doing the December waterbird count. Although one of the Sewage Pools is still empty the other one had some good birds including six Greater White-fronted Goose, a Ruddy Shelduck, an immature Great White Pelican, two Common Shelduck, five Black-necked Grebe, nine Eurasian Wigeon, four Common Pochard and two Northern Pintail. Twelve Eurasian Golden Plover were on Spiros Pool and six Eurasian Curlew were in the nearby fields which also had many Eurasian Skylark and Meadow Pipit feeding in them.

Nearly 700 Greater Flamingo were on the main Salt Lake as were around 140 Common Shelduck. An unexpected find were three Common Crane – maybe the same birds that were at Akrotiri Salt Lake recently (see record photo). Flocks of Kentish Plover, Dunlin and Little Stint were feeding on the edges of the water. Towards the north east corner there were more than 20 Common Snipe and a single Temminck’s Stint. Water and Meadow Pipit were around and were put up by hunting Western Marsh and Hen Harrier and two Common Buzzard. In the reeds I found three Moustached Warbler and two Bluethroat, a Water Rail and a Jack Snipe, as well as many Common Chiffchaff, two Grey Wagtail and a first winter Yellow Wagtail. 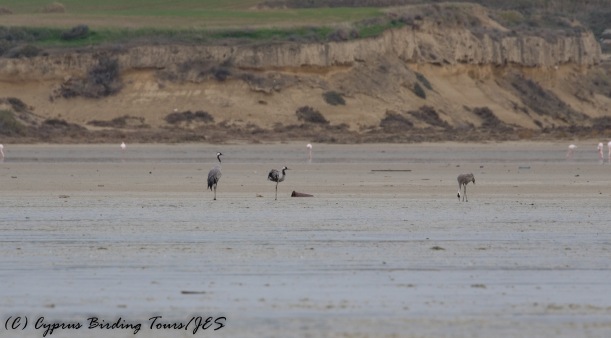 A lot of disturbance around the Salt Lake including some idiots walking in the water to get nearer to the Greater Flamingos there. Away from them in a quieter area there was a Temminck’s Stint, a few Little Ringed and Common Ringed Plover, seven Common Snipe and larger numbers of Kentish Plover, Dunlin, Little Stint and Common Redshank.

The White-headed Duck were still at Oroklini when I popped in there before heading home.