Some interesting birds at Meneou this morning including at least 230 Black-winged Stilt, plus much smaller numbers of Ruff, Common and Little Ringed Plover, Little Stint, Common and Green Sandpiper and Collared Pratincole. At least eight Little Tern and a juvenile White-winged Tern. Plenty of Yellow-legged Gull roosting on salt flats and flying around the Sewage Works including several juveniles (see photo).

One of several juvenile Yellow-legged Gull currently to be found along Spiros Beach and Larnaca Sewage Works. Also in the area today were an Eleonora’s Falcon, Little and Gull-billed Tern, Temminck’s and Little Stint, Dunlin, Ruff, Little Ringed Plover and Greater Flamingo.

Spent most of the day birding around Limassol. Found a couple of singing Moustached Warblers at Zakaki Marsh where I also heard Eurasian Penduline Tit, Water Rail and Reed Bunting. There were two Reed Bunting at Phasouri Reed-beds and two Western Marsh Harrier, a ring-tail Hen Harrier and a Common Buzzard. Plenty of gulls on Lady’s Mile including Armenian, Caspian, Yellow-legged and Black-headed as well as a single adult Heuglin’s Gull, an adult and an immature Mediterranean Gull, an immature Slender-billed Gull and a Common Gull.

Also went to Germasogeia Dam where several Cyprus Warbler were singing and there was a very large flock of European Serin. Two Common Snipe flew up from the stream

No sign of any spring migrants anywhere that I visited.

At Lady’s Mile this lunch time for the BirdLife Cyprus New Year’s meal. Quick opportunity to check out the gulls there – mainly Black-headed Gull but also an adult Little Gull (photo) and Slender-billed Gull (photo) as well as a couple of Yellow-legged Gull, only one Caspian Gull, a Mediterranean Gull and several Armenian Gull of varied ages. A Sandwich Tern flew by further out at sea.

Some interesting waders on the Sewage Pools today although the Broad-billed Sandpipers that were there on Saturday seem to have moved on. Today I found an adult Ruddy Turnstone still in breeding plumage and a Eurasian Curlew – both of which are never common here. Also several Dunlin, Curlew Sandpiper, Common Ringed Plover, Little Ringed Plover, Ruff, Wood Sandpiper, Common Sandpiper and four Collared Pratincole (inc a juv). Still several Black-winged Stilt around as well as c30 Spur-winged Plover and at least 14 Kentish Plover.

In addition to four Greater Flamingo (photo) there were 11 Ferruginous Duck with Northern Shoveler numbers now up to 17. Six Garganey were preening and roosting as was at least one Common Teal.

Ten juvenile Yellow-legged Gull flew in and single juvenile White-winged Tern and Gull-billed Tern were feeding over the water. A Squacco Heron flew over heading east and two Pallid Swift flew over in with many Barn Swallow.

Back in Larnaca and out early to do the monthly waterbird count there. Good to find three Broad-billed Sandpiper and a Grey Plover on the Sewage Works pools but very dry elsewhere with just a small stream of water in the Kamares end of the main Salt Lake.

Some good birds and some warmer weather today at Larnaca. The flocks of Greylag and Greater White-fronted Goose and Ruddy Shelduck were on the Sewage Works pools as was a first winter Great Black-headed (Pallas) Gull. Three Eurasian Curlew and thirty Eurasian Golden Plover were on Spiros Pool with twenty Eurasian Wigeon. In the fields at Pervolia there were large flocks of Eurasian Skylark and also seven more Eurasian Golden Plover. I stopped on the road from Kiti to Petounta, at an area where I have found Calandra Lark in the past, and soon heard and saw three in display flight over the area.

More Eurasian Skylark at Petounta where there was also a Grey Plover and three Kentish Plover. Returning to the Salt Lake there didn’t seem to be as many Greater Flamingo as in mid January but still plenty of Common Shelduck, Common Black-headed Gull and small waders. A roosting flock of larger gulls was mainly Caspian Gull but there were also a few Armenian and Yellow-legged Gulls as well as two Heuglin’s.

At the Kamares area I found a Green Sandpiper, two Common Snipe (see photo), two Water Pipit, two Cattle Egret, seven Spur-winged Lapwing, a Grey Wagtail, many Common Chiffchaff, two Moustached Warblers and a Bluethroat. As I was leaving a larger bird on the grassy area caught my eye and I was very pleased to find my first Great Spotted Cuckoo of the year. 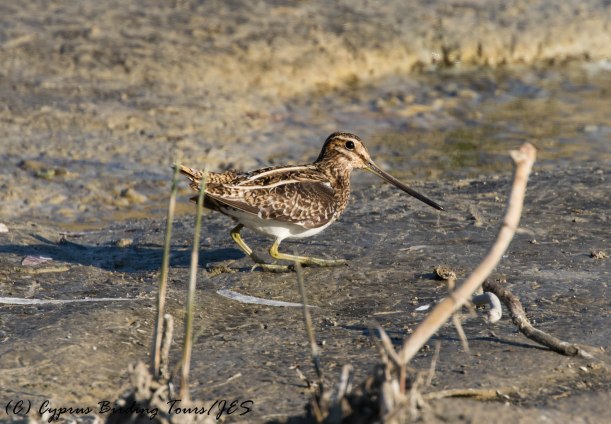 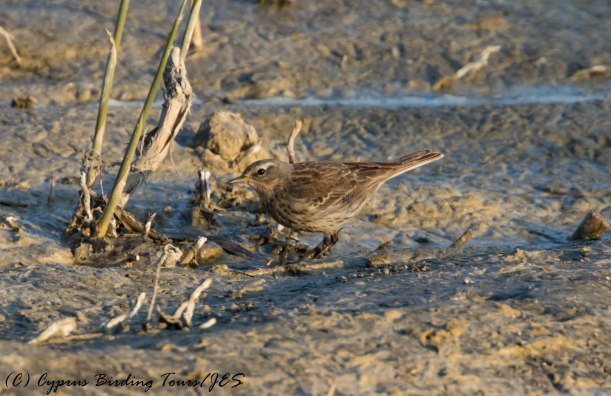 Visited some of the Limassol sites today and although it was quite quiet (unless you like Common Black-headed Gulls!) I still saw some interesting birds, including a pair of Bonelli’s Eagle, and finished the afternoon watching seven Eurasian Griffon Vultures circling over Kensington Cliffs. 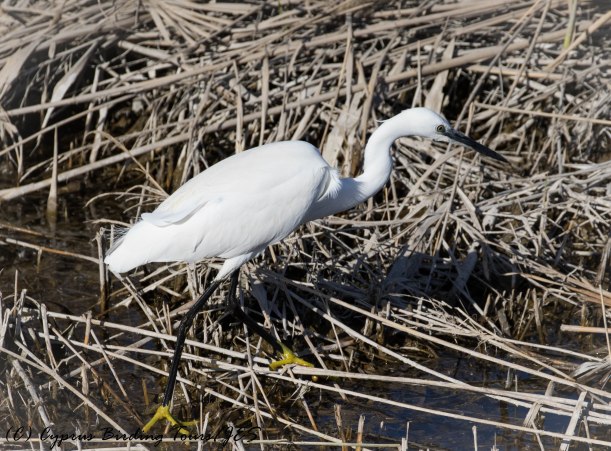 Nearly 100 Yellow-legged Gull are around Larnaca Airport coast at the moment, post breeding. This juvenile was there this morning.

Still some interesting waders on Larnaca Sewage Works pools with an adult and a juvenile Pied Avocet among them today.

The juvenile can just be made out in this photo taken from a distance. Also present:

Back out birding in the heat of Larnaca this morning and found the following: